The whole aim of practical politics is to keep the populous alarmed and thus clamorous to be led to safety, by menacing it with an endless series of hobgoblims, all of them imaginary. – H.L. Mencken, satirist  (1880-1956)

History writes that the 1918 Spanish flu pandemic was said to have originated in Spain during the war. Now history is being rewritten in Wikipedia to say the pandemic originated in the U.S. and that the cause was not a virus, as the experts claimed it to be, but instead originated from the bird flu, Subtype H1N1. In August of 1918, a more lethal “virus” was discovered to create a second wave. A third wave occurred the following winter and by spring, the virus had “run its course.” 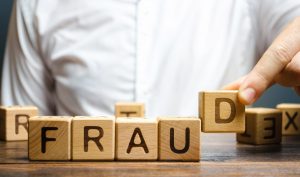 Before you criticize the ever-changing content of Wikipedia, NPR suggests the same thing. All are sources of propaganda, part of a Playbook of destruction. None tell the full truth. History delivers clues about what is happening now. Read more about the 1918 pandemic in my article, Recycling the Spanish Flu pandemic.

Since 1918, bacteria has emerged as the true source of the Spanish flu pandemic, an idea supported by most influenza researchers. An estimated 95% (or higher) of the deaths were caused by bacterial pneumonia, not influenza, and not a virus. Bacteria were the real killers in the 1918 Spanish Flu Pandemic, which attacked healthy people in their prime. Bacterial pneumonia does attack people in their prime. Flu attacks the young, old and immunocompromised. Bacteria are the reason the mask failed then and why they fail now.

Today, we witness the reenactment of the 1918 pandemic script where Antony Fauci is the acting “expert” opinion.  In the 2008 Oct 1 issue of The Journal of Infectious Diseases, Dr. Anthony Fauci, director of the National Institute of Allergy and Infectious Diseases (NIAID), admitted:

The majority of deaths during the influenza pandemic of 1918-1919 were not caused by the influenza virus acting alone. Instead, most victims succumbed to bacterial pneumonia following influenza virus infection. The pneumonia was caused when bacteria that normally inhabit the nose and throat invaded the lungs along a pathway created when the virus destroyed the cells that line the bronchial tubes and lungs.

What about the Ebola pandemic that caused death from bleeding? The Black Death which occurred in the medieval times was also an Hemorrhagic Ebola virus, and was not caused by fleas from rats. When it arrived in London in 1348, there were many reports of comets coming to Earth which Shakespeare recorded in his play, Land of the Dead  in 1599. Land of the Dead opened the Globe Theatre for the first time. The show was about a comet and a zombie apocalypse, disease, famine and the destruction which followed. Interestingly, Francis Bacon and the Queen of England show up as characters in the play. As some suggest, Bacon, who edited the King Jame Version of the Bible, was purported to have penned the Shakespeare works himself. Did Shakespeare, or Francis Bacon, a 33rd Freemason, know information about the true source?

There is no better English written this side of Shakespeare than that in the King James Translation. -Charlton Heston 1992

The source of all pandemics is up for debate because “experts” change their identities as frequently as they change their opinions.

Falling From the Skies 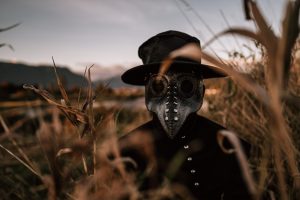 The truth is never fully disclosed in the media no matter what era the so-called pandemic is formulated. The media was created to distract people with false information. Media is a false narrative, while movies and fiction are closer to the truth.

Myth and medieval paintings tell truth. These paintings illustrate the evidence of disasters  associated with the sighting of comets in the sky. The result? Black rain or pollution coming into the earth’s atmosphere, towers breaking, likely due to earthquakes, broken trees, indicating fierce winds, hurricanes or tornadoes, and sick people. Why do paintings with plague doctors all wear bird masks? What is the purpose of their black robes and respirators against toxic air? Is this evidence of control of pandemics? Is history repeating itself? Is that what history does?

Physicist Dr. Claudia Albers suggests that plagues have been associated with comets for thousands of years. What are these comets that Dr. Albers suggests are the source of manufactured viruses and other toxins?  She suggests one comet, also called Planet X, enters Earth’s atmosphere on a regular basis and is also the source of floods, locust plagues, GMO insect plagues, and other weapons designed to destroy life. More information on the work of research physicist Dr. Claudia Albers, can be found here.

None of this should be surprising due to evidence from 1996 showing how weather modification has been a part of national security policy under the military. It provides “battlespace dominance” according to a “leaked” document on May 5, 2008. Think SpaceX program. Are SpaceX and PlanetX the same X? Does X refer to XMen who are mutant super heroes who are written to be demigods, and whose existence netted a billion dollar franchise for Hollywood?

The document titled, Weather as a force multiplier was document to the Air Force on owning the weather by 2025. SpaceX program includes all modes of synthetic weather modification weaponry used today, nationally and internationally. These methods create and control of severe storms, temperature and pressure gradients, to create tornadoes. The technology created hurricane Katrina and all polar vortices that result in blackouts and power outages. They alter global climate.  Per the “leaked” document, such programs are limited “only by the imagination.” Fog generation comes from Smart tech and nanotechnology that talk to each other. Space weather modification controls the ionosphere and magnetosphere for force enhancement using particle beams, lasers, aerosols, ionospheric mirrors, chemical vapors, and radiation.

The EPA reports that PM10 and sub-micron pollution particles cause blood to become sticky, making it tougher for the heart to pump and increasing the risk of blood clots and vessel damage…  Tiny filaments called polymers are part of the brew. In 1990, a NATO report detailed how high flying aircraft can modify the atmosphere by spraying polymers to absorb electromagnetic radiation. (See US patent 6315213 showing aqueous polymers dispersed in a storm diminish rain. – Leaked documents, page 11 of 35.

See diagrams here. While the ‘climate change’ may appear natural, it is a deception. So, when insurance companies call weather disasters as “an act of god,” they become exempt from paying out insurance. Instead, the question should be, who is playing god?

Now that we have tied together the historical and political realities for which we mindlessly wave our flags, we still hope that sufficient numbers of American lab rats will miraculously awaken from their collective stupor and take stock of our appalling situation.  After all rodents have a notoriously short lifespan and are always killed when no longer useful to those conducting research.  The irony of this horror story is that we rats are being plundered to finance our own demise. – Leaked Documents, page 16 of 35).

How can the source of any epidemic, pandemic, or flu be a virus? Viruses are not organisms. Therefore, they cannot reproduce unless they enter a cell of a living organism. Go back to Biology 101. No matter how much you believe that a virus is transmissible, you cannot catch a virus, which depends on the contents of your cells to survive and thrive. Once outside the cell, a true virus loses its ability to do anything. It dies.  This is why it cannot be blamed for a flu and why killing a virus using a vaccine is a ruse meant to confuse. The only way a virus can infect someone to cause damage is if it is manufactured outside your body and then injected into it. If you inject technology that has been engineered to spread from host to host, you have now acquired a weapon of mass cell destruction. This also means that if a virus is blamed for spreading through a population, it is not of Nature. See my article on The Reinfection Ruse. 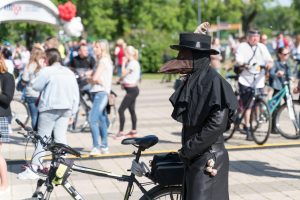 Recently, the Global Times and the WHO disclosed that the Wuhan’Rona virus did not originate from Wuhan, China.  If not from Wuhan, then from where does the weaponized virus come? Is it a virus if it has not been isolated as a virus? Is it an operating system to change the human species? Does calling it ‘Coronavirus’ (one word) mislead people into thinking it is a virus? Why did Anthony Fauci write in the March 2019 NEJM that the ‘Rona virus was not a threat, with a seasonal fatality rate of 0.1%?

Do insect-borne plagues, GMOs, and Artificial Intelligence all originate from the same destructive source? Is the new mRNA Operating system that looks like an injection come from the same source? Does this source also control the weather with technology disclosed and used by governments and by Gas & Electric companies like PG&E and Idaho Power? Does this technology have anything to do with the Floating City reported to be seen hanging around in the skies above China that has been captured several times on video?

If viruses cannot be tracked on Earth with the latest tracking technology, are they the product of technology designed by higher dimensional beings, here to cause chaos, those whose faces are never seen? To start, get ready for the government to curtail oil production in the US and depend on foreign oil. This will soon lead to gas shortages, higher fuel costs, which will lead to food shortages.

China is purported to own the U.S. and its ports. Does China also have a monopoly on properties in the sky? Is the floating city CGI, a cloaked ship, or something else? Do governments with this technology have the power to steer the rivers of the sky? While China may appear to own properties worldwide, what is the true source is behind China’s power claim? Is the pandemic a distraction for a major catastrophic event in the next six months?

This is no longer a conspiracy theory. We are living a conspiracy reality. Look beyond a story of a virus to see the bigger story, if you dare. It will take you to new places. Why has the truths of these events remained hidden for thousands of years when evidence to their existence can be found in multiple places, texts, paintings, myths and ‘leaked’ government documents? Could the true source be spread out as clues to connect by curious investigators? Is the hidden truth that we we are living out a Playbook, such as the one depicted in the Book of Revelations, edited by Francis Bacon?

So while we await the great awakening, have a wonderful barium-dried summer, under a synthetic tarpaulin of aluminum-white, particle-laden electrically charged, aviation scum that passes for sky. – Leaked documents, page 16 of 35.