Home/blog, May 2020/Mask-A-Raid on Freedom
Previous Next

The face mask has become a fashion statement in the year 2020. It may not have much use for anything else.

According to the Journal of the Medical American Association (JAMA), the face mask should only be used under certain circumstances.

When Should a Mask Be Used?

Pattern of a Pandemic

In their book Virus Mania: How the Medical Industry Continually Invents Epidemics, Making Billion Dollar Profits At Our Expense, authors Torsten Engelbrecht and Claus Kohnlelin say “the virus enemy is rarely found.” After the Spanish Flu pandemic of 1918-1920, news reports of the event were also hard to come by. Accounts of the pandemic were erased from newspapers, magazines, books, society’s collective memory. One reason could be that doctors and pharmacologists were shown the limits of their power against an imaginary virus. After all, it was the homeopathic hospitals that saw a 98% success rate in treating the Spanish Flu. Other hospitals such as Battle Creek, Kellogg and MacFadden’s Health  Restorium were getting almost 100% healings with their water cure, baths, enemas, fasting, simple healing methods, and natural foods.

The pattern of a pandemic has been played out before. When the Medical industry pushed mass vaccination (with toxic heavy metals) campaigns, and overmedication during the Spanish flu, people acquiesced. By the time the pandemic reached its peak, the government had closed theaters, dance halls, restaurants, and sports facilities. People were made to wear masks.

What are the masks doing to protect people?

Very little. If there is a contaminant being spread, then the misuse of a mask could make it a vector for further contamination. And unless contaminated masks are disposed of properly, in a biohazard waste facility, are we not wasting resources, time, and energy? 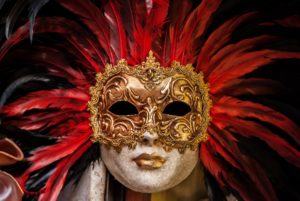 Masking yourself to protect other people and “save lives” is a raid on health freedom and healthy individuals.

Virologist, Judy Mikovits, PhD says that wearing a mask hampers oxygen uptake (hypoxia) and is unhealthy due to continued inhalation of your own carbon dioxide. She also suggests that Covid-19 has probably been in all flu vaccines since 2013/2015.

Cloth masks do not filter small particles. Why not instead, wash your hands? Why not enhance your immune system with a healthy diet, exercise, sunshine, and medicinal herbs known to protect against flu?

Costco and other big box stores have instituted a policy of mask wearing while shopping in their stores, unless you have a medical condition. Aren’t we all at risk for a medical condition from breathing carbon dioxide, called Hypoxia? Wearing a mask to protect others from viral transmission is similar to vaccinating yourself to protect others from disease.

Ask yourself why must you set yourself on fire to keep other people warm? By agreeing to unsubstantiated dictates, we allow officials to weaponize healthy people. If the cotton mask does not protect anyone from anything, then what is its true purpose?

I was fired for refusing a flu shot and was told that wearing an N95 mask was unacceptable because they don’t prevent viral transmission. But now we can tie a pair of underwear around our face and we’re good to go, we’re protecting the public. Are you freaking kidding me! Good grief the insanity. – Michelle McAllister Krinsky, RN, April 2020

Is masking an acceptable request, or is it a form of mind control, part of a shaming ritual that has been used throughout the centuries by various dictators? Does mask compliance negate the need for Martial Law? Will it lead to mandated annual flu vaccines?

History of Ritual and Shame Masks 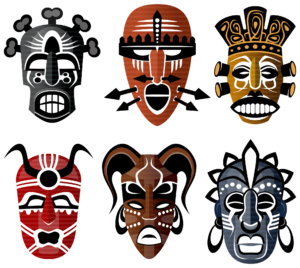 African ritual masks formerly served as agents of social control, used to enforce allegiance to the rulers. Believed to be imbued with magical supernatural powers, even today, women and children are forbidden to see them outside rituals.

A shame mask was a device of punishment used in Europe and New World colonies during the 17th and 18th centuries. They were meant to humiliate the person who was forced to wear it. The masks were made of cold metal and would have been tortuous when fitted tightly on the head. Shame masks were also used to punish mainly women, who were found guilty of gossiping, gluttony, eavesdropping, and lying. These masks had different designs meant to inflict further discomfort and / or humiliation, and indicated the type of crime was committed.

In the 16th century, the ‘scold’ was used to describe a woman who was a gossip, a shrew, or bad-tempered to prevent her from speaking. The ‘scold’ device was fitted with an iron curb that projected into her mouth and rested on the top of it. Sometimes the curb was studded with spikes, which inflicted pain on the woman if she tried to speak.

Some masks were shaped like the heads of animals. A cow-headed shame mask meant lazy, and donkey-headed or rabbit-headed ones were used by fools and eavesdroppers. Exaggerated facial features, such as long noses were added to indicate someone guilty of lying, being nosy, or being proud and arrogant. Gossiper shame masks had long tongues attached, while the real tongues were cut out. 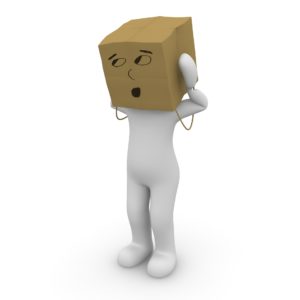 Some masks also had a small bell attached at the top or apparatus to make a loud whistling sound when the person breathed, to announce the arrival of its wearer and increase the humiliation factor.

Why put a box on your head if it proved to be ineffective? What if you were told to clap your hands one night each week, while social distancing was in effect. Would you participate?
[/fusion_text]

The Covid pandemic was planned to be unleashed while people were distracted with the charges of the Trump impeachment.

What we are embarking on is nothing less than the most breathtaking recovery effort our city has ever seen,” said Lori Lightfood, Mayor of Chicago

Bottom line? See presentation by Rev. Danny Jones of Northland Baptist Church who says this novel Coronavirus – Covid-19 is a fabricated crisis designed to deceive people to accept a radically different world from what people have been led to believe. The shutdown of the economy, food supply, customs, traditions, and laws, is a raid on freedom to create a One World Solution where people will be confined physically, mentally, and emotionally.

We’ve seen thirty million Americans lose their jobs, the stock market drop 10,000 points, the government take charge of production and change laws to pick which businesses are winners and which are losers, watch people stop assembling and meeting in groups. The people are allowing the creation of a police state where neighbor is snitching on neighbor.

Is this the new America? Or is this Marxist Socialism? Is this a drill to test the resolve of a free people?

Will you resolve to question authority, question the masking ritual, and take a stand to defend the freedom that is your right by birth?